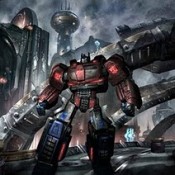 As some of you know on some of my posts, I'm working on a sci-fi related project based around the Transformers called "Beyond the Stars". This is just a small taste of what's to come later.


The draft story in a small summary is that the Autobots have left Cybertron on the Ark in search of a new home. But Megatron and his Decepticons are in hot pursuit on-board the Nemesis, leading to a climatic battle in space. Meanwhile, a bunch of Decepticon fleets split off from the main group to track down other Autobot cruisers across the galaxy that left Cybertorn before the Ark ever departed.

The model of the Ark was originally a xnalara model imported to SFM via a little complicated process. I'm in the middle of doing the Nemesis, but the problem with the textures have stopped me from continuing on this project. A fix to this is very much appreciated. Along with that I don't have anymore models from "War/Fall of Cybertron" that I could use aside from WFC Optimus and Brawl. This project will have to put on ice until I can get that Nemesis issue fixed and get more Transformers models.
"Source Filmmaker Amateur and aspiring young writer."
Top
Post a reply
1 post • Page 1 of 1